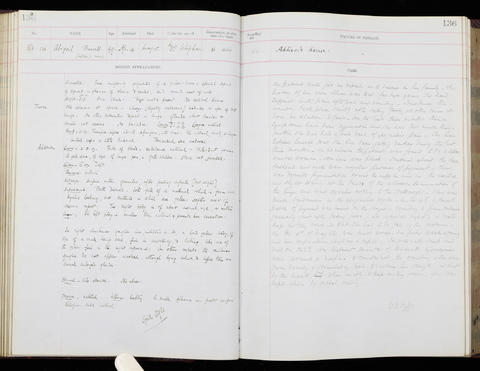 Occupation or role: Children’s nurse
Age: 49
Gender: Female
Date of admission: 14 Apr 1894
Date of death: 5 May 1894
Disease (transcribed): Addison's disease
Disease (standardised): Addison disease (Adrenal glands)
Admitted under the care of: Whipham, Thomas Tillyer
Medical examination performed by: Ogle, Cyril
Post mortem examination performed by: Fyffe, William Kington
Medical notes: 'The patient could give no details as to disease in her family - The history of her own illness was that for two years she had suffered with pain after food and vomiting - Sometimes this vomiting took place shortly after taking food, at other times it bore no relation to food - For the last three months these symptoms have been aggravated and she has lost much flesh - further she has had a good deal of epigastric pain - She has noticed herself that she has been getting darker during the last three months'
Body parts examined in the post mortem: Thorax, abdomen
Type of incident: n/a