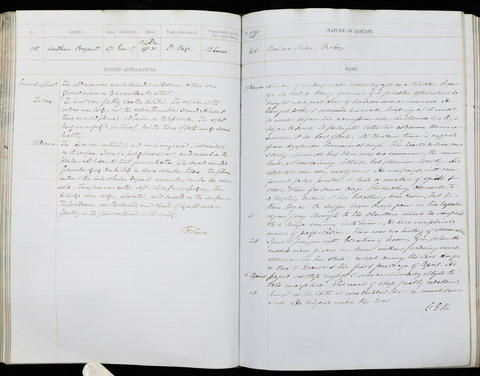 Occupation or role: Traveller
Age: 47
Gender: Male
Date of admission: 17 Mar 1858
Date of death: 21 Apr 1858
Disease (transcribed): Cirrhosis of liver. Dropsy
Disease (standardised): Liver cirrhosis (Liver); Edema (Systemic)
Admitted under the care of: Page, William Emanuel
Medical examination performed by: Holmes, Timothy
Post mortem examination performed by: Rogers, George Goddard
Medical notes: 'A man of intemperate habits engaged as a traveller. A year ago he had a heavy fall out of a phaeton after which he brought up a good deal of blood on several occasions. He then got better & resumed his work, keeping at it until 10 weeks before his admission when he observed his legs began to swell’
Body parts examined in the post mortem: Thorax, abdomen