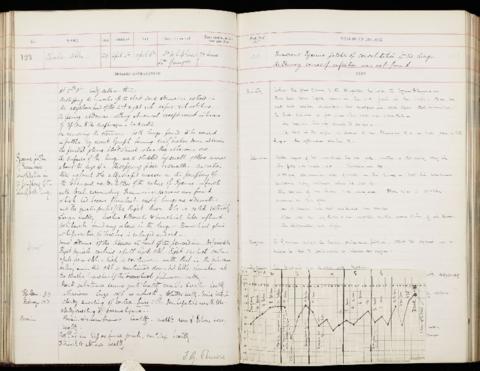 Occupation or role: Potman
Age: 29
Gender: Male
Date of admission: 2 Apr 1888
Date of death: 6 Apr 1888
Disease (transcribed): Numerous pyaemic patches of consolidation in the lungs. The primary source of infection was not found
Disease (standardised): Sepsis (Lungs)
Admitted under the care of: Whipham, Thomas Tillyer and Gamgee, Arthur
Medical examination performed by: Penrose, Francis George
Post mortem examination performed by: Sisley, Richard
Medical notes: 'When he first came to the hospital he told the house physician that six days before admission he had pain in the loins; that he had had neither diarrhoea nor constipation and that that morning he had shivered & felt sick, but had not vomited. He denied having drunk to excess’
Body parts examined in the post mortem: Body parts examined: Abdomen, lungs, heart, spleen, kidneys, brain