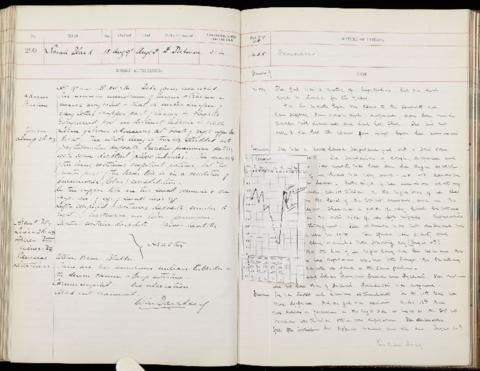 Occupation or role: Kitchen maid
Age: 15
Gender: Female
Date of admission: 9 Aug 1888
Date of death: 14 Aug 1888
Disease (transcribed): Tuberculosis
Disease (standardised): Tuberculosis (Lungs)
Admitted under the care of: Dickinson, William Howship
Medical examination performed by: Davidson, William Marshall
Post mortem examination performed by: Sisley, Richard
Medical notes: 'The girl was a native of Argyleshire, but she had lived in London for two years. For two months before she came to the hospital she had suffered from cough and dyspnoea, had been much troubled with diarrhoea and had lost flesh. She did not take to her bed till about four days before her admission’
Body parts examined in the post mortem: Body parts examined: Larynx, trachea, pleurae, lungs, heart, liver, spleen, kidneys, pancreas, intestines