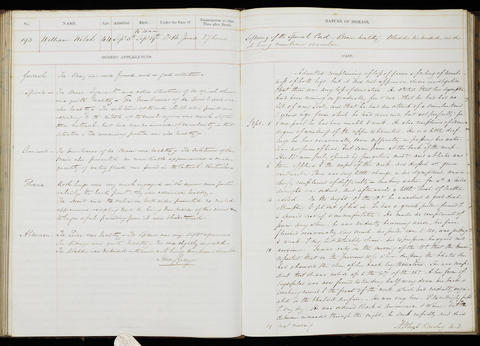 Occupation or role: [Occupation not stated]
Age: 44
Gender: Male
Date of admission: 5 Sep 1849
Date of death: 19 Sep 1849
Disease (transcribed): Softening of the spinal cord. Brain healthy. Bladder distended, and its lining membrane vascular
Disease (standardised): Softening (Spinal cord); Disease (Bladder)
Admitted under the care of: Bence Jones, Henry
Medical examination performed by: Barclay, Andrew Whyte
Post mortem examination performed by: Gray, Henry
Medical notes: 'Admitted complaining of loss of power & feeling of numbness of both legs, but it did not appear on closer investigation that there was any loss of sensation. He stated that his symptoms had been coming on gradually for 5 months, that he had had no fit of any sort, and that he had an attack of a similar kind 3 years ago from which he had recovered, but not perfectly. For 5 months past he has been unable to work’
Body parts examined in the post mortem: Spine, cranium, thorax, abdomen