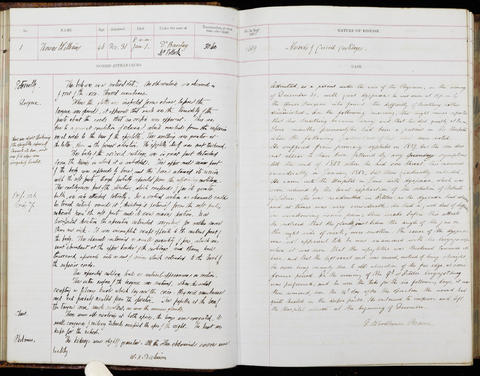 Occupation or role: Tailor
Age: 46
Gender: Male
Date of admission: 31 Dec 1863
Date of death: 1 Jan 1864
Disease (transcribed): Necrosis of cricoid cartilage
Disease (standardised): Necrosis (Trachea)
Admitted under the care of: Barclay, Andrew Whyte and Pollock, George
Medical examination performed by: Dickinson, William Howship
Post mortem examination performed by: Braine, Francis Woodhouse
Medical notes: 'Admitted, as a patient under the care of the physician, on the evening of December 31, with great dyspnoea; he was seen at 11pm by the house surgeon who found the difficulty of breathing rather diminished. […] He suffered from primary syphilis in 1837, but the sore does not appear to have been followed by any secondary symptoms till the end of 1862 when he had sore throat’
Body parts examined in the post mortem: Larynx, chest, abdomen