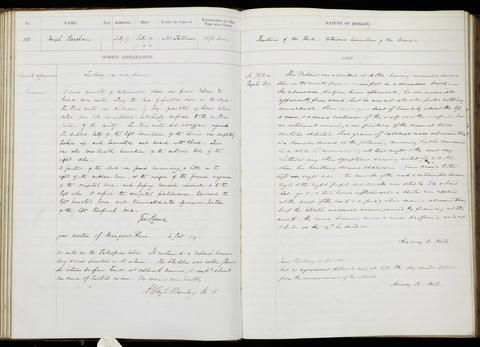 Occupation or role: [Occupation not stated]
Age: [Age not stated]
Gender: Male
Date of admission: 19 Jul 1849
Date of death: 19 Jul 1849
Disease (transcribed): Fracture of the skull. Extensive laceration of the brain
Disease (standardised): Fracture (Skull); Laceration (Brain)
Admitted under the care of: Tatum, Thomas
Medical examination performed by: Holl, Harvey Buchanan
Post mortem examination performed by: Pollock, George
Medical notes: 'This patient was admitted at 12pm, having received a severe blow in the mouth from a man’s foot in a drunken broil. On admission, half an hour afterwards, he was insensible apparently from drink, but he was not cold & his pulse nothing remarkable’
Body parts examined in the post mortem: Cranium