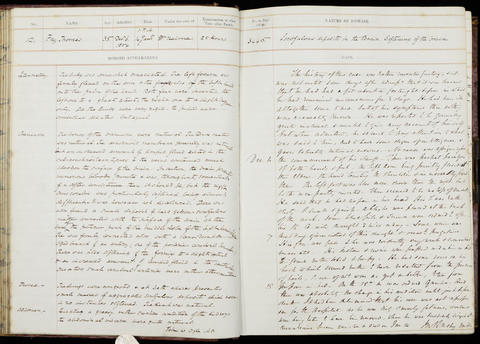 Occupation or role: [No occupation stated]
Age: 35
Gender: Male
Date of admission: 6 Dec 1854
Date of death: 14 Jan 1855
Disease (transcribed): Scrofulous deposits in the Brain. Softening of the brain.
Disease (standardised): Tuberculosis (Brain); Softening (Brain)
Admitted under the care of: Nairne, Robert
Medical examination performed by: Barclay, Andrew Whyte
Post mortem examination performed by: Ogle, John William
Medical notes: Some days after admission it was learned that the patient had had a fit about a fortnight before in which he had remained unconscious for three days. He had been ill altogether some five months, but of his symptoms, nothing was accurately known.
Body parts examined in the post mortem: Cranium, thorax and abdomen
Type of incident: n/a