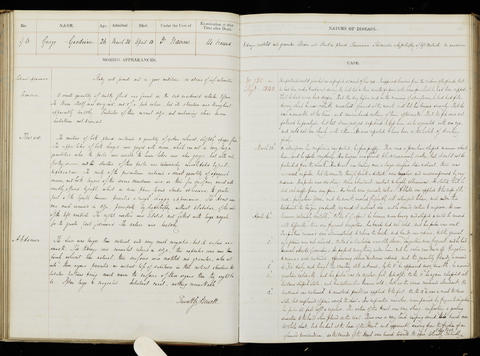 Occupation or role: [No occupation stated]
Age: 25
Gender: Male
Date of admission: 28 Mar 1845
Date of death: 13 Apr 1845
Disease (transcribed): Kidneys mottled and granular. Brain wet. Fluid in pleurae. Pneumonia. Pericarditis. Hypertrophy of left ventricle. No anasarca
Disease (standardised): Disease (Kidneys); Disease (Brain, Lungs); Pneumonia (Lungs); Pericarditis (Heart); Disease (Heart)
Admitted under the care of: Nairne, Robert
Medical examination performed by: Hewett, Prescott Gardner
Post mortem examination performed by: Fuller, Henry William
Medical notes: 'This patient could give but an imperfect account of his case. It appeared however from the evidence of the friends that he had been under treatment during the last two or three months for pain in the loins, for which he had been cupped. That he had never had dropsy. That the day before, and on the morning of admission, he had had fits, during which he was violently convulsed, foamed at the mouth, and bit his tongue severely’
Body parts examined in the post mortem: Cranium, thorax, abdomen