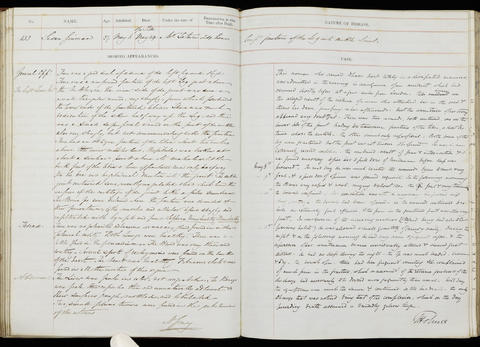 Occupation or role: [No occupation stated]
Gender: Female
Age: 37
Date of admission: 6 May 1854
Date of death: 14 May 1854
Disease (transcribed): Compound fracture of the leg into the ankle joint
Disease (standardised): Fracture (Leg)
Admitting doctor: Tatum, Thomas
Surgeon: Gray, Henry
Physician: Holmes, Timothy
Medical notes: 'This woman, who seemed to have lived lately in a dissipated manner, was admitted in the evening in consequence of an accident which had occurred shortly before at a few miles from London. The injury was the alleged result of the violence of a man who attacked her in the road & threw her down, jumping on her afterwards, but the correctness of her story appeared very doubtful’
Body parts examined in the post mortem: Left lower extremities, thorax, abdomen