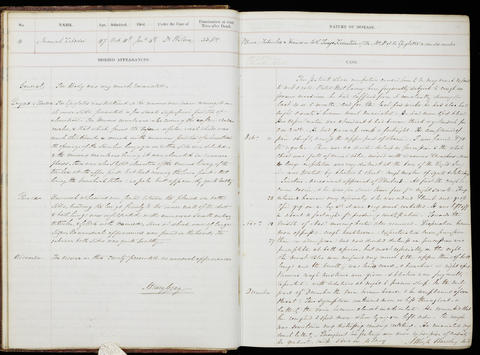 Occupation or role: [Occupation not stated]
Age: 47
Gender: Male
Date of admission: 11 Oct 1848
Date of death: 4 Jan 1849
Disease (transcribed): Phthisis. Tubercles & vomicae in both lungs. Ulceration of the epiglottis & chordae vocales
Disease (standardised): Tuberculosis (Lungs); Abscess (Lungs); Ulcer (Larynx)
Admitted under the care of: Wilson, James Arthur
Medical examination performed by: Barclay, Andrew Whyte
Post mortem examination performed by: Gray, Henry
Medical notes: 'This patient, whose occupation caused him to be very much exposed to wet & cold, stated that having been frequently subject to cough on former occasions, he had suffered from it constantly during the last 4 or 5 months, and for the last few weeks he had also had night sweats & become much emaciated. He had never spit blood. His expectoration was abundant & had become thick & yellowish for 2 or 3 weeks. He had given up work a fortnight’
Body parts examined in the post mortem: Larynx, trachea, thorax, abdomen