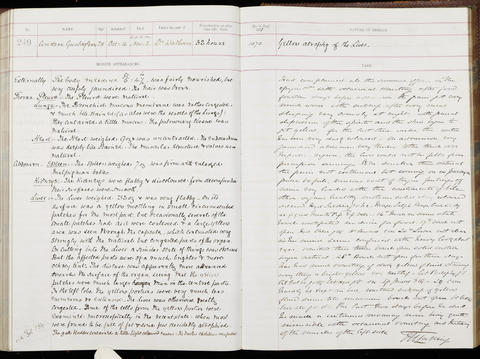 Admitted under the care of: Wadham, William
Medical examination performed by: Laking, Francis Henry
Post mortem examination performed by: Whipham, Thomas Tillyer
Medical notes: 'Had complained all the summer of pain in the epigastrium with occasional vomiting after food. Fourteen days before admission the pain got very much worse with sickness after every meal. Sleeping very soundly at night, with general depression of the spirits and the skin began to get yellow. For the last three weeks, the water has been very dark-coloured’
Post mortem notes: Body parts examined in the post mortem: Thorax, abdomen, cranium
Illustrations or photographs: Yes (see PM/1871/154)
Type of incident: n/a