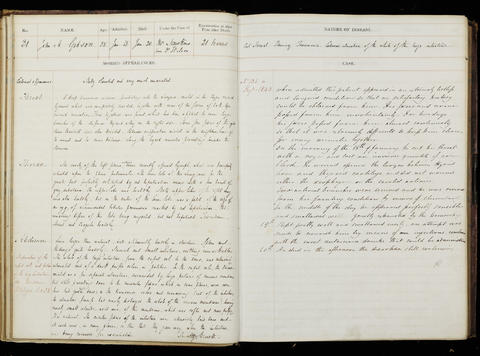 Admitted under the care of: Hawkins, Caesar Henry
Medical examination performed by: Hewett, Prescott Gardner
Post mortem examination performed by: Lee, Henry
Medical notes: 'When admitted this patient appeared in an extremely listless and languid condition, so that no satisfactory history could be obtained from him. His faeces and urine passed form him involuntarily […] On the morning of the 18th of January he cut his throat with a razor and lost an immense quantity of arterial blood’
Body parts examined in the post mortem: Throat, thorax, abdomen

Preparation D.a.38 (caput coli and portion of the large intestine)