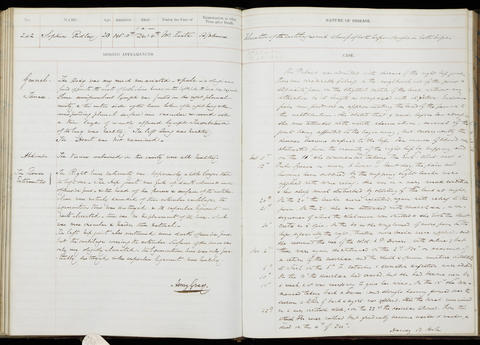 Occupation or role: [Occupation not stated]
Age: 20
Gender: Female
Date of admission: 10 Oct 1849
Date of death: 4 Dec 1849
Disease (transcribed): Ulceration of the cartilages and abscess of both hips. Sloughs on both hips
Disease (standardised): Ulcer (Hips); Abscess (Hips); Sloughing (Hips)
Admitted under the care of: Keate, Robert
Medical examination performed by: Holl, Harvey Buchanan
Post mortem examination performed by: Gray, Henry
Medical notes: 'This patient was admitted with disease of the right hip joint. There was considerable fulness in the neighbourhood of the joint & exquisite pain on the slightest motion of the limb, without any alteration in its length as compared with its fellow’
Body parts examined in the post mortem: Thorax, abdomen, lower extremities