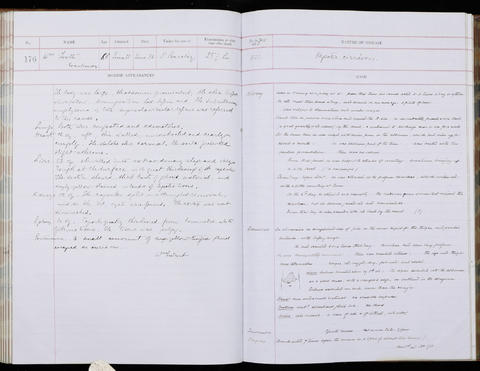 Occupation or role: Coachman
Gender: Male
Age: 68
Date of admission: 21 Jun 1878
Date of death: 26 Jun 1878
Disease (transcribed): Hepatic cirrhosis
Disease (standardised): Liver cirrhosis (Liver);
Admitting doctor: Barclay, Andrew Whyte
Medical examination performed by: Owen, Herbert Isambard
PM performed by: Ewart, William
Medical notes: 'History. Was in training as a jockey at 15: from that time his bowels acted 3-6 times a day or oftener: He ate meat three times a day, and drank on an average, 3 pints of beer. Was subject to rheumatism and winter coughs. About 1850 he fell over some stones and buried the R. [Right] side: he immediately passed some blood (a great quantity, of red colour) by the bowel, and continued to discharge more or less for a week. At the same time he was seized with severe pain in the abdomen, which laid him up for about a month: he was delirious part of the time: was treated with turpentine fomentations: there was no icterus. From that period he was subject to attacks of vomiting, sometimes bringing up a little blood ('a teaspoonful'). Eleven days before admn [admission], he was attacked with profuse diarrhoea, which continued, with a little vomiting at times'
Body parts examined in the post mortem: Lungs, heart, liver, kidneys, spleen, peritoneum
Illustrations: Yes
Type of incident: n/a