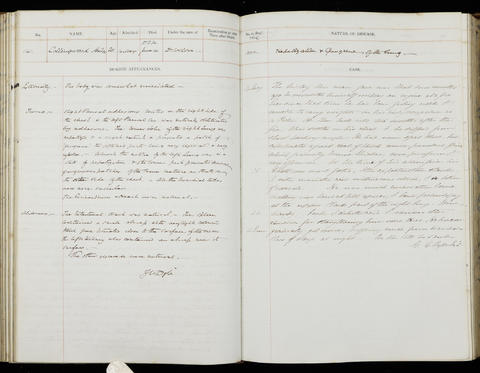 Occupation or role: Porter
Age: 20
Gender: Male
Date of admission: 14 May 1856
Date of death: 14 Jun 1856
Disease (transcribed): Heptization and gangrene of the lung
Disease (standardised): Disease (Lung); Gangrene (Lung)
Admitted under the care of: Wilson, James Arthur
Medical examination performed by: Rogers, George Goddard
Post mortem examination performed by: Ogle, John William
Medical notes: The history this man gave was that some months ago he over exerted himself working an engine at a fire. Ever since that time he had been feeling weak and unable to carry weights. He then took cold two months after the fire. This settled on his chest and he suffered from a short hacking cough.
Body parts examined in the post mortem: Thorax and abdomen
Type of incident: n/a