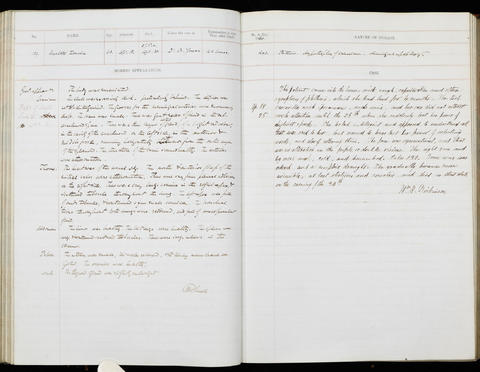 Occupation or role: [Occupation not stated]
Age: 63
Gender: Female
Date of admission: 18 Apr 1860
Date of death: 30 Apr 1860
Disease (transcribed): Phthisis. Hypertrophy of cranium. Meningeal apoplexy
Disease (standardised): Tuberculosis (Lungs); Disease (Brain); Stroke (Brain)
Admitted under the care of: Bence Jones, Henry
Medical examination performed by: Dickinson, William Howship
Post mortem examination performed by: Holmes, Timothy
Medical notes: 'This patient came into the house with cough, expectoration and other symptoms of phthisis which she had had for 4 months. She took cascarilla with ipecacuan, and wine, and her case did not attract much attention until the 25th when she suddenly lost her power of distinct speech. She looked intelligent and appeared to understand all that was said to her’
Body parts examined in the post mortem: Cranium, thorax, abdomen, pelvis, neck