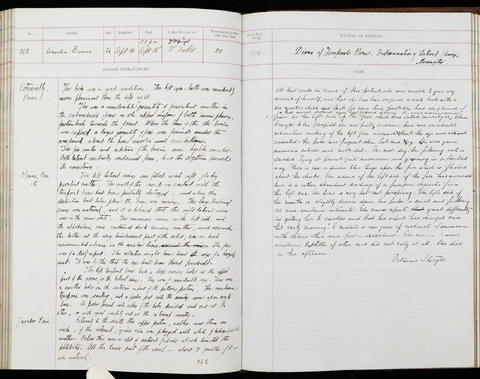 Occupation or role: Married
Age: 24
Gender: Female
Date of admission: 14 Sep 1864
Date of death: 15 Sep 1864
Disease (transcribed): Disease of temporal bone. Inflammation of lateral sinus. Meningitis
Disease (standardised): Disease (Skull); Inflammation (Brain); Meningitis (Brain)
Admitted under the care of: Fuller, Henry William
Medical examination performed by: Dickinson, William Howship
Post mortem examination performed by: Sturges, Octavius
Medical notes: 'All that could be learnt of this patient, who was unable to give any account of herself, was that she had been confined a week back with a six months child, that for some time past she had complained of pain in the left side of the face which was called neuralgia’
Body parts examined in the post mortem: Brain, sinus, jugular vein, chest, abdomen