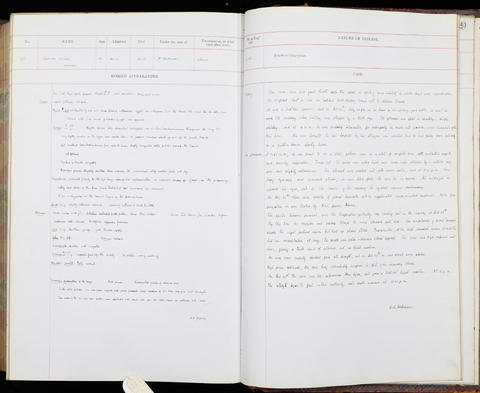 Occupation or role: Labourer
Age: 38
Gender: Male
Date of admission: 24 Dec 1891
Date of death: 31 Dec 1891
Disease (transcribed): Bronchopneumonia
Disease (standardised): Bronchopneumonia (Lungs)
Admitted under the care of: Dickinson, William Howship
Medical examination performed by: Rolleston, Humphry Davy
Post mortem examination performed by: Dickinson, William Lee
Medical notes: 'This man had had good health upon the whole, in spite of some liability to winter cough and expectoration. He confessed that he was an habitual hard drinker, though not to delirium tremens. He was a builder's labourer; and on Dec 24th, being so far as he knew in his ordinary good health, he went to work till midday, when building was stopped by a thick fog. The afternoon was spent in drinking, chiefly whiskey, and at 4pm he was probably intoxicated, for subsequently he could not remember what happened after this time. He was brought to this hospital by two strangers who reported that he had fallen down suddenly in a public house shortly before'
Body parts examined in the post mortem: Thorax, abdomen