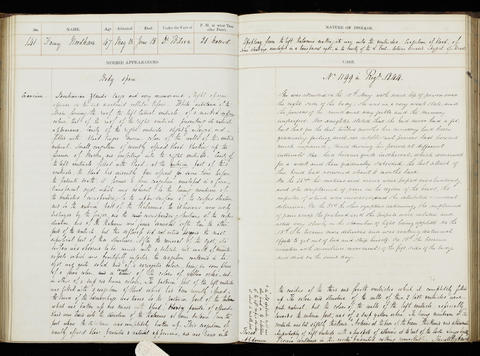 Occupation or role: [No occupation stated]
Age: 47
Gender: Female
Date of admission: 13 May 1844
Date of death: 18 Jun 1844
Disease (transcribed): Apoplexy from the left thalamus making its way into the ventricles. Coagulum of blood, of some standing, enveloped in a transparent cyst, in the cavity of the left ventricle. Arteries diseased. Hypertrophy of heart.
Disease (standardised): Stroke (Brain ); Cysts (Brain ); Disease (Arteries); Hypertrophy (Heart)
Admitted under the care of: Wilson, James Arthur
Medical examination performed by: n/a
Post mortem examination performed by: Hewett, Prescott Gardner
Medical notes: The patient was admitted with some loss of power over the right side of the body. She was in a very weak state, and the powers of the mind were very feeble and the memory imperfect.
Body parts examined in the post mortem: Cranium, thorax and abdomen
Type of incident: n/a