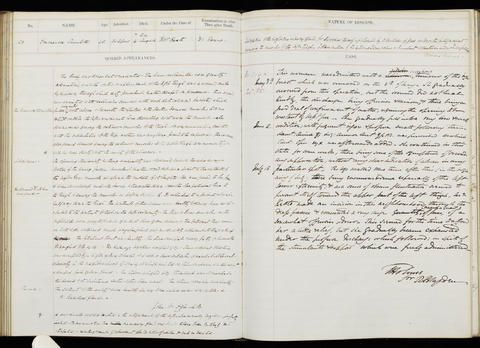 Occupation or role: [No occupation stated]
Age: 45
Gender: Female
Date of admission: 30 Apr 1851
Date of death: 4 Aug 1851
Disease (transcribed): Extirpation of the right mammary gland for scirrhus thereof, & followed by collections of pus under the integument & among the muscles of the left thigh. Inflammation of the external iliac veins & purulent collections under iliac fascia. Diseased kidneys
Disease (standardised): Excision (Breast); Scirrhus (Breast); Suppuration (Thigh); Inflammation (Pelvis); Disease (Kidneys)
Admitted under the care of: Keate, Robert
Medical examination performed by: Holmes, Timothy and Blagden, Robert
Post mortem examination performed by: Ogle, John William
Medical notes: 'This woman was admitted with a scirrhous tumour of the right breast which was removed on the 8th of May. She gradually recovered from this operation, but the wound did not heal kindly, the discharge being offensive & [?], & there being a good deal of confinement of matter, requiring the opening to be constantly kept free’
Body parts examined in the post mortem: Lower extremities, abdomen, thorax