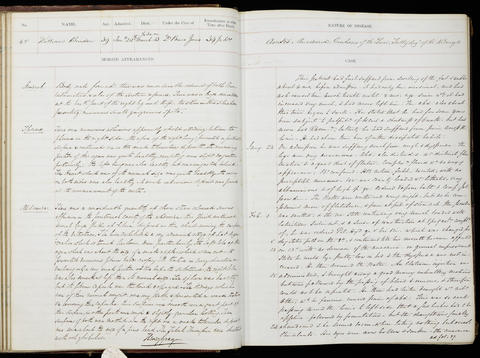 Occupation or role: [Occupation not stated]
Age: 39
Gender: Male
Date of admission: 24 Jan 1848
Date of death: 13 Mar 1849
Disease (transcribed): Ascites. Anasarca. Cirrhosis of the liver. Fatty degeneration of the kidneys
Disease (standardised): Ascites (Peritoneum); Edema (Systemic); Liver cirrhosis (Liver); Disease (Kidneys)
Admitted under the care of: Bence Jones, Henry
Medical examination performed by: Barclay, Andrew Whyte
Post mortem examination performed by: Gray, Henry
Medical notes: 'This patient had first suffered from swelling of the feet & ankles about 6 months before admission. It had only been occasional, and had not caused him much trouble until 3[?] months ago since which it had increased very much, & had never left him. The abdomen also about this time began to swell. He stated that he had for some years been subject to palpitation of heart & shortness of breath, but had never had rheumatism; latterly he had suffered from pain across the loins. He had at one time been of rather dissipated habits’
Body parts examined in the post mortem: Thorax, abdomen