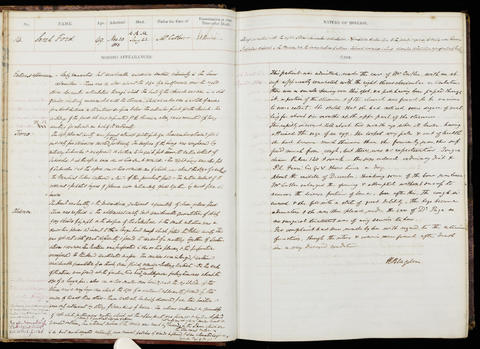 Occupation or role: [No occupation stated]
Age: 49
Gender: Female
Date of admission: 20 Nov 1850
Date of death: 22 Jan 1851
Disease (transcribed): Abscess connected with the right sterno-clavicular articulation. Complete destruction of the joints & caries of contiguous bones. Scrofulous deposits in the ovaries, & on the lining surface of uterus. Tubercle & vomicae in lung. Ulceration of intestines & perforation of rectum
Disease (standardised): Abscess (Chest); Caries (Joints, bones); Tuberculosis (Ovaries, uterus, lungs); Ulcer (Intestines); Perforation (Rectum)
Admitted under the care of: Cutler, Edward
Medical examination performed by: Blagden, Robert
Post mortem examination performed by: Ogle, John William
Medical notes: 'This patient was admitted, under the care of Mr Cutler [Edward Cutler] with an abscess apparently connected with the right sterno-clavicular articulation. There was a small opening over this spot, & a tube having been passed through it, a portion of the sternum & of the clavicle was found to be carious to some extent. She stated that she had noticed some degree of swelling for about six months at the upper part of the sternum’
Body parts examined in the post mortem: Thorax, abdomen