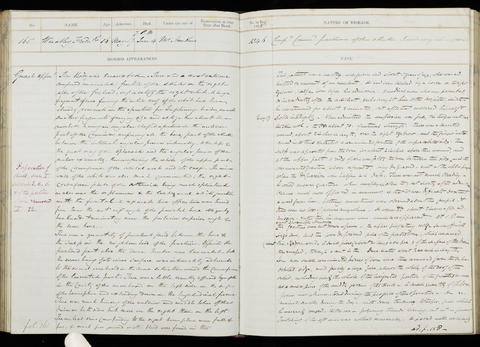 Occupation or role: [No occupation stated]
Age: 16
Gender: Male
Date of admission: 17 May 1855
Date of death: 4 Jun 1855
Disease (transcribed): Compound comminuted fracture of the skull. Secondary abscesses
Disease (standardised): Fracture (Skull); Abscess (Skull)
Admitted under the care of: Hawkins, Caesar Henry
Medical examination performed by: Holmes, Timothy
Post mortem examination performed by: Gray, Henry
Medical notes: The patient was admitted on account of an accident. He had been kicked by a horse on the right eyebrow half an hour before admission.
Body parts examined in the post mortem: Skull, thorax and abdomen
Type of incident: Trauma/accident

Preparation of skull. Series I. Subseries 3.e.6. and of the portions of bone removed I.22.