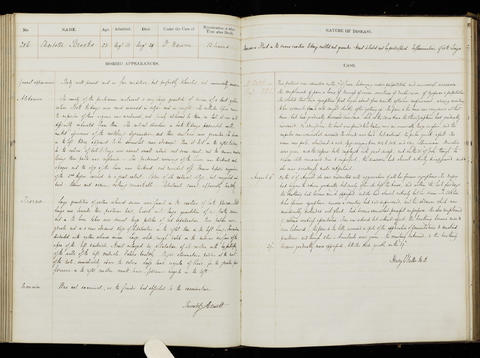 Occupation or role: [No occupation stated]
Age: 23
Gender: Female
Date of admission: 15 Aug 1845
Date of death: 29 Aug 1845
Disease (transcribed): Anasarca. Fluid in the serous cavities. Kidneys mottled and granular. Heart dilated and hypertrophied. Inflammation of both lungs
Disease (standardised): Edema (Systemic); Disease (Kidneys, heart); Inflammation (Lungs)
Admitted under the care of: Nairne, Robert
Medical examination performed by: Hewett, Prescott Gardner
Post mortem examination performed by: Fuller, Henry William
Medical notes: 'This patient was admitted on the 7th of June, labouring under palpitation and universal anasarca. She complained of pain in the loins, of dimness of vision, sometimes of double vision, of dyspnoea & palpitation. She stated that these symptoms first began about five months after her confinement, arising according to her account from a cold caught shortly after ‘getting up’ ‘
Body parts examined in the post mortem: Abdomen, thorax (‘Cranium was not examined, as the friends had objected to the examination’)