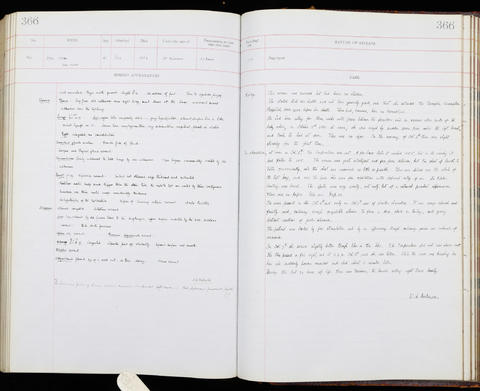 Occupation or role: Shoe maker
Age: 47
Gender: Female
Date of admission: 6 Oct 1891
Date of death: 8 Oct 1891
Disease (transcribed): Pneumonia
Disease (standardised): Pneumonia (Lungs)
Admitted under the care of: Dickinson, William Howship
Medical examination performed by: Rolleston, Humphry Davy and C.S.
Post mortem examination performed by: Dickinson, William Lee
Medical notes: 'This woman was married but had no children. She stated that her health had not been generally good, and that she attended the Brompton Consumption Hospital seven years before her death. There had, however, been no haemoptysis. She had been ailing for three weeks with pains between the shoulders and in various other parts of the body when, on October 3rd 1891 at noon, she was seized by sudden severe pain under the left breast and took to bed at once'
Body parts examined in the post mortem: Thorax, abdomen