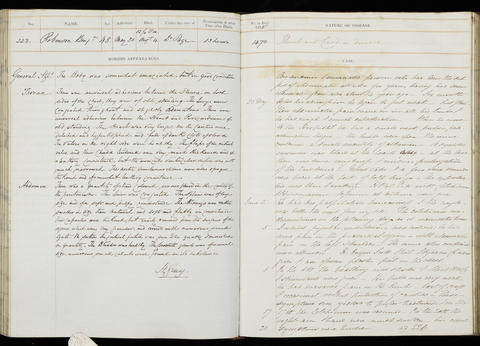 Occupation or role: [No occupation stated]
Age: 48
Gender: Male
Date of admission: 30 May 1855
Date of death: 4 Aug 1855
Disease (transcribed): Renal and Cardiac disease
Disease (standardised): Disease (Kidney); Disease (Heart)
Admitted under the care of: Page, William Emanuel
Medical examination performed by: Rogers, George Goddard
Post mortem examination performed by: Gray, Henry
Medical notes: This patient had been subject to rheumatic attacks for years, having had severe rheumatic fever about fourteen years ago. Six months before his admission he began to feel weak. He lost flesh and then rheumatic pain came on in all his limbs and he had a cough and much expectoration.
Body parts examined in the post mortem: Thorax and abdomen
Type of incident: n/a