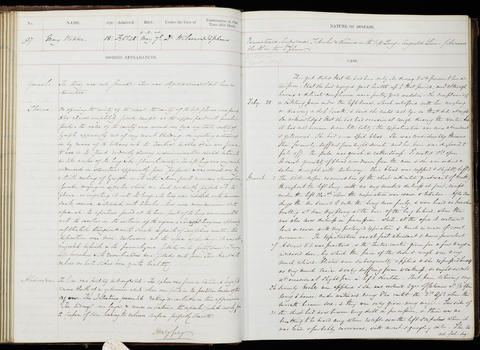 Occupation or role: [Occupation not stated]
Age: 18
Gender: Female
Date of admission: 28 Feb 1849
Date of death: 7 May 1849
Disease (transcribed): Pneumothorax. Empyema. Tubercles & vomicae in the left lung. Congested liver. Fibrinous block in the spleen
Disease (standardised): Pneumothorax (Lungs); Empyema (Lungs); Tuberculosis (Lungs); Abscess (Lungs); Congestion (Liver)
Admitted under the care of: Wilson, James Arthur
Medical examination performed by: Barclay, Andrew Whyte
Post mortem examination performed by: Gray, Henry
Medical notes: This girl stated that she had been only ill during 3 weeks previous to her admission, that she had enjoyed good health up to the period, and although having a delicate complexion was in pretty good condition. She complained of catching pain under the left breast, which interfered with her coughing or drawing a deep breath, & said she could not lye on that side at night’
Body parts examined in the post mortem: Thorax, abdomen