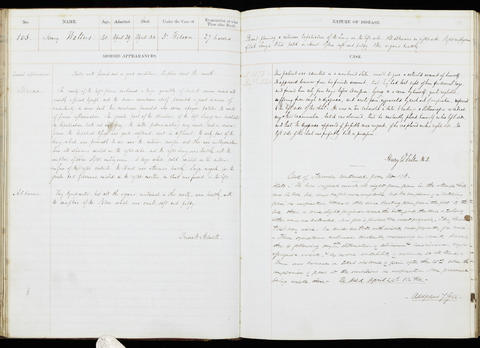 Occupation or role: [No occupation stated]
Age: 40
Gender: Male
Date of admission: 29 Apr 1846
Date of death: 30 Apr 1846
Disease (transcribed): Recent pleurisy and extensive hepatisation of the lung on the left side. Old adhesions on right side. Slight emphysema of both lungs. White patch on heart. Spleen soft and pulpy. Other organs healthy.
Disease (standardised): Pleurisy (Pleura); Disease (Lung); Emphysema (Lung); Disease (Heart); Disease (Spleen)
Admitted under the care of: Wilson, James Arthur
Medical examination performed by: Fuller, Henry William
Post mortem examination performed by: Hewett, Prescott Gardner
Medical notes: This patient was admitted in a moribund state, unable to give a collection account of himself. It appeared however from his friends account, that they had lost sight of him for several says and found him four days before admission, lying in a room by himself, quite neglected and suffering from cough, dyspnoea and acute pain.
Body parts examined in the post mortem: Thorax and abdomen
Type of incident: n/a