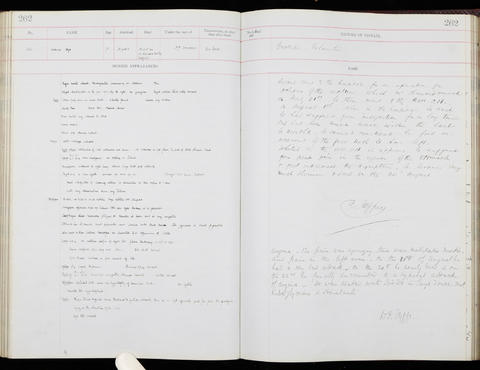 Occupation or role: [Occupation not stated]
Age: 70
Gender: Male
Date of admission: 1 Aug 1894
Date of death: 20 Aug 1894
Disease (transcribed): Gastritis. Exhaustion
Disease (standardised): Gastritis (Stomach); Exhaustion (Systemic)
Admitted under the care of: Haward, John Warrington
Medical examination performed by: Rolleston, Humphry Davy
Post mortem examination performed by: Jaffrey, Francis
Medical notes: 'Patient came to the hospital for an operation for polypus of the rectum which Mr Haward removed on July 21st he then went to the A.M.C.H. [Atkinson Morley Convalescent Hospital]. On August 1st when in the hospital he said he had suffered from indigestion for a long time but had been much worse within the last 6 months, he cannot masticate his food on account of the few teeth he has left'
Body parts examined in the post mortem: Head, thorax, abdomen
Type of incident: n/a