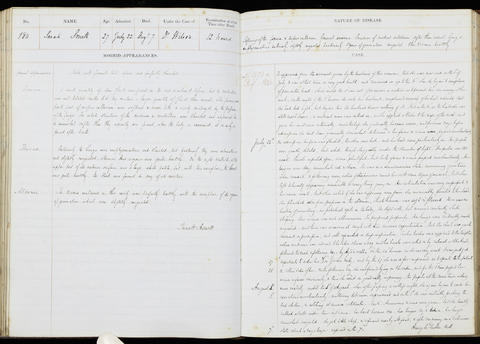 Occupation or role: [No occupation stated]
Age: 27
Gender: Female
Date of admission: 22 Jul 1846
Date of death: 7 Aug 1846
Disease (transcribed): Softening of the fornia and corpus callosum. General anaemia. Structures of cerebral substance softer than usual. Lungs emphysematous anteriorly, slightly congested posteriorly. Organs of generation congested. Other viscera healthy.
Disease (standardised): Softening (Brain ); Anaemia (Systemic); Emphysema (Lung); Congestion (Uterus, Vagina, Ovaries, Fallopian tubes)
Admitted under the care of: Wilson, James Arthur
Medical examination performed by: Fuller, Henry William
Post mortem examination performed by: Hewett, Prescott Gardner
Medical notes: It appeared from the account given by the husband of the woman, that she was in good health until the 6th when she began to complain of pain in the head. On the night of the 8th she woke her husband, complained severely of her head and insisted that she had had a fit.
Body parts examined in the post mortem: Cranium, thorax and abdomen
Type of incident: n/a