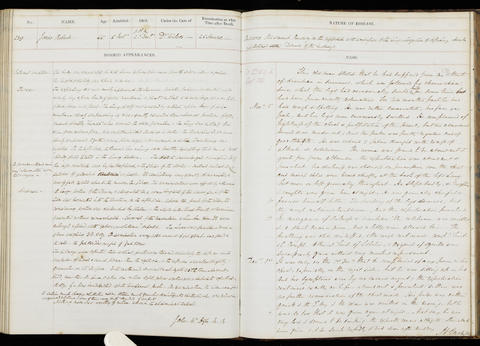 Occupation or role: [No occupation stated]
Age: 65
Gender: Male
Date of admission: 5 Nov 1851
Date of death: 2 Dec 1851
Disease (transcribed): Anasarca. Old & recent pleurisy on the right side with compression of the lung. Congestion of left lung. Heart hypertrophied. Disease of the kidneys
Disease (standardised): Edema (Systemic); Pleurisy (Lungs); Congestion (Lungs); Disease (Heart, kidneys)
Admitted under the care of: Wilson, James Arthur
Medical examination performed by: Barclay, Andrew Whyte
Post mortem examination performed by: Ogle, John William
Medical notes: 'This old man stated that he had suffered from an attack of diarrhoea in summer, which was followed by rheumatism; since which the legs had occasionally swelled, but for some time had been permanently oedematous. For two months past he had had cough & spitting. He was rather emaciated, his face was pale, and his legs were enormously swelled’
Body parts examined in the post mortem: Thorax, abdomen