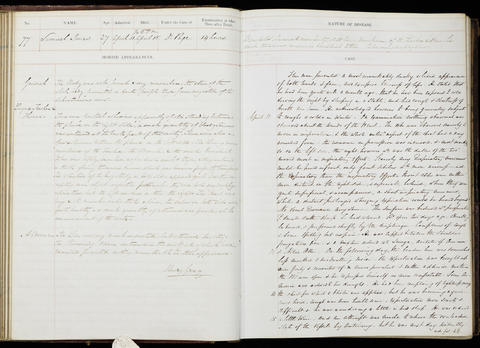 Occupation or role: [Occupation not stated]
Age: 27
Gender: Male
Date of admission: 11 Apr 1849
Date of death: 18 Apr 1849
Disease (transcribed): Bronchitis. Increased vascularity of the lining membrane, of the trachea & bronchi. Viscid tenacious mucus in bronchial tubes. Pulmonary emphysema
Disease (standardised): Bronchitis (Lungs); Disease (Lungs); Emphysema (Lungs)
Admitted under the care of: Page, William Emanuel
Medical examination performed by: Barclay, Andrew Whyte
Post mortem examination performed by: Gray, Henry
Medical notes: 'This man presented a most remarkably dusky & livid appearance of both hands & face, and excessive blueness of lips. He stated that he had been quite well a month ago, that he had been exposed to cold during the night by sleeping in a stable, and had cough & shortness of breath ever since. He acknowledged however to being generally subject to coughs & cols in winter’
Body parts examined in the post mortem: Larynx, trachea, thorax, abdomen