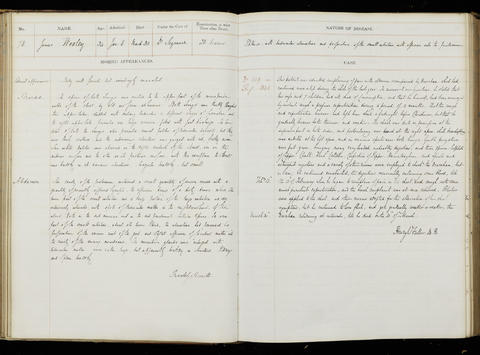 Occupation or role: [No occupation stated]
Age: 34
Gender: Male
Date of admission: 8 Jan 1845
Date of death: 30 Mar 1845
Disease (transcribed): Phthisis, with tubercular ulceration and perforation of the small intestine with effusion into the peritoneum
Disease (standardised): Tuberculosis (Lungs); Ulcer (Intestines); Effusion (Abdomen)
Admitted under the care of: Seymour, Edward James
Medical examination performed by: Hewett, Prescott Gardner
Post mortem examination performed by: Fuller, Henry William
Medical notes: 'This patient was admitted complaining of pain in the abdomen accompanied by diarrhoea, which had continued more or less during the whole of the last year. In answer to our questions, he stated that his wife and 7 children had all died of consumption, and that he himself had been annoyed by constant cough & profuse expectoration during a period of 2 months’
Body parts examined in the post mortem: Thorax, abdomen