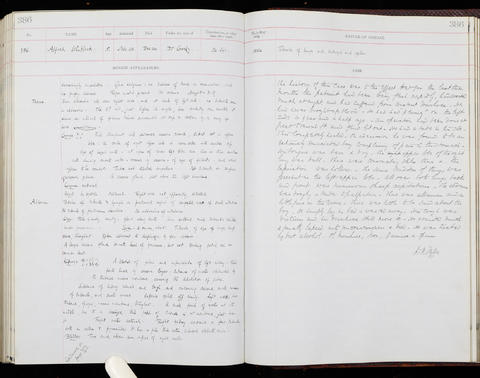 Occupation or role: [Occupation not stated]
Age: 5
Gender: Male
Date of admission: 28 Nov 1894
Date of death: 20 Dec 1894
Disease (transcribed): Tubercle of lungs and kidneys and spleen
Disease (standardised): Tuberculosis (Lung); Tuberculosis (Kidney); Tuberculosis (Spleen)
Admitted under the care of: Cavafy, John
Medical examination performed by: Ogle, Cyril
Post mortem examination performed by: Fyffe, William Kington
Medical notes: 'The history of this case was to the effect that for the last three months the patient had been losing flesh rapidly, had sweated much at night, and had suffered from constant diarrhoea - He had never brought up blood - He had had 'pleurisy' on the left side a year and a half ago - An operation had been done at great ormond st. and fluid let out - He had a tube in his side - This completely healed - On admission he was found to be an extremely emaciated boy complaining of pain in the stomach'
Body parts examined in the post mortem: Thorax, abdomen, vertebrae
Illustrations: Yes
Type of incident: n/a