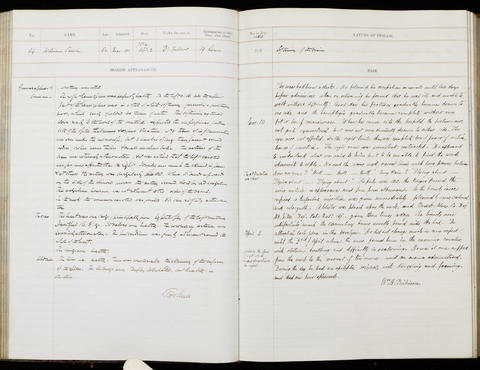 Occupation or role: [Occupation not stated]
Age: 60
Gender: Male
Date of admission: 10 Mar 1860
Date of death: 2 Apr 1860
Disease (transcribed): Softening of the brain
Disease (standardised): Softening (Brain)
Admitted under the care of: Fuller, Henry William
Medical examination performed by: Dickinson, William Howship
Post mortem examination performed by: Holmes, Timothy
Medical notes: 'This man had been a clerk. He followed his occupation as usual until two days before admission, when on returning he found that he was ill and unable to talk without difficulty. Next day his features gradually became drawn to one side’
Body parts examined in the post mortem: Cranium, thorax, abdomen