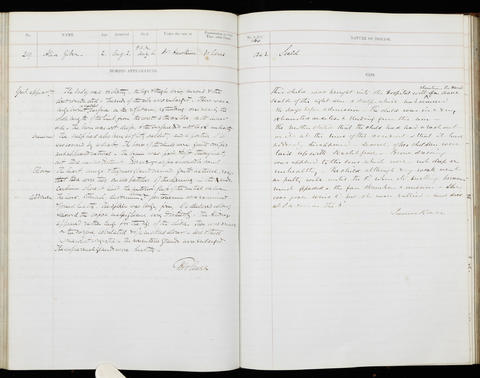 Occupation or role: [Occupation not stated]
Age: 2
Gender: Female
Date of admission: 2 Aug 1860
Date of death: 6 Aug 1860
Disease (transcribed): Scald
Disease (standardised): Burn (Skin)
Admitted under the care of: Hawkins, Caesar Henry
Medical examination performed by: Rouse, James
Post mortem examination performed by: Holmes, Timothy
Medical notes: 'This child was brought into the hospital with ulcerations of a severe scald of the right arm & scalp, which had occurred 14 days before admission. The child was in a very exhausted condition & bleeding from the nose. The mother stated that the child had had a rash out on it at the time of the accident, & that it had suddenly disappeared. Several of her children were laid up with scarlet fever’
Body parts examined in the post mortem: Cranium, thorax, abdomen