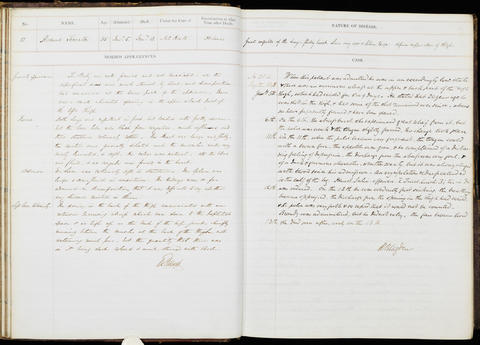 Occupation or role: [No occupation stated]
Age: 55
Gender: Male
Date of admission: 5 Jan 1848
Date of death: 13 Jan 1848
Disease (transcribed): Great congestion of the lungs. Flabby heart. Liver very soft and spleen large. Diffuse suppuration of thigh.
Disease (standardised): Congestion (Lung); Disease (Heart); Disease (Liver); Disease (Spleen); Suppuration (Leg)
Admitted under the care of: Keate, Robert
Medical examination performed by: Blagden, Robert
Post mortem examination performed by: Pollock, George
Medical notes: When this patient was admitted he was in an exceedingly low state and there was an enormous abscess at the upper and back part of the left thigh, which had existed for eight or nine days. He stated that twenty years ago he was shot in the thigh, and that some of the shot remained ever since.
Body parts examined in the post mortem: Thorax, abdomen and left lower extremity
Type of incident: n/a