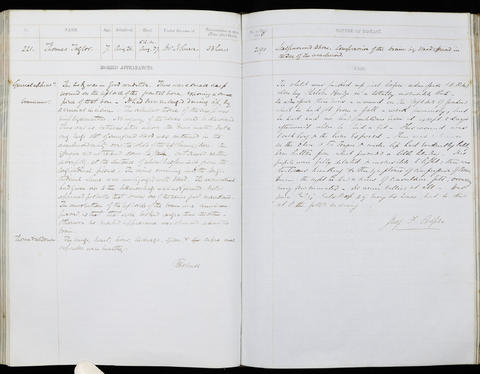 Occupation or role: [Occupation not stated]
Age: 7
Gender: Male
Date of admission: 26 Aug 1858
Date of death: 27 Aug 1858
Disease (transcribed): Scalp wound to bone. Compression of the brain by blood effused in the sac of the arachnoid
Disease (standardised): Wound (Scalp); Compression (Brain); Effusion (Brain)
Admitted under the care of: Johnson, Henry Charles
Medical examination performed by: Holmes, Timothy
Post mortem examination performed by: Cooper, George Frederick
Medical notes: 'The child was picked up just before admission close by Chelsea Bridge in a totally insensible state. On admission there was a wound on the left [of his] forehead which he had got from a fall a week previously, but he had had not bad symptoms from it except 2 days afterwards hen he had a fit. This wound was 1 inch long & the bone exposed’
Body parts examined in the post mortem: Cranium, thorax, abdomen