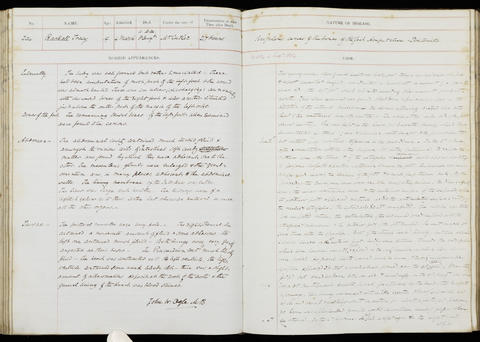 Occupation or role: [No occupation stated]
Gender: Female
Age: 19
Date of admission: 4 Mar 1854
Date of death: 8 Aug 1854
Disease (transcribed): Scrofulous caries of bones of foot. Amputation. Peritonitis
Disease (standardised): Caries (Foot); Amputation (Foot); Peritonitis (Abdomen)
Admitting doctor: Cutler, Edward
Surgeon: Ogle, John William
Physician: Holmes, Timothy
Medical notes: 'This young woman, whose general health was pretty good, though her complexion was pale & aspect somewhat languid, was admitted in March last on account of a sore on the inner side of the left foot, which had existed according to her account for about a month’
Body parts examined in the post mortem: Bones of the foot (‘there had been amputation of most part of the left foot’), abdomen, thorax