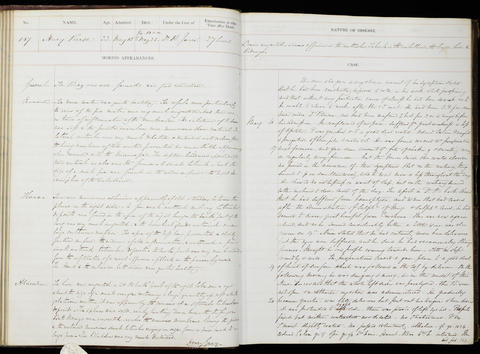 Occupation or role: [Occupation not stated]
Age: 23
Gender: Male
Date of admission: 16 May 1849
Date of death: 22 May 1849
Disease (transcribed): Brain congested, serous effusion in the ventricles. Tubercles in the cerebellum, the lungs, liver & kidneys
Disease (standardised): Congestion (Brain); Tuberculosis (Brain, lungs, liver, kidneys)
Admitted under the care of: Bence Jones, Henry and Pitman, Henry
Medical examination performed by: Barclay, Andrew Whyte
Post mortem examination performed by: Gray, Henry
Medical notes: 'This man, who have a very obscure account of his symptoms, stated that he had been constantly exposed to cold in his work while perspiring and that without any particular cause of illness he had been so weak as to be unable to return to work after the 3rd inst. He had been OP [out-patient for some time under Dr Pitman [Henry Pitman], and had been confined to bed for 3 or 4 days before his admission’
Body parts examined in the post mortem: Cranium, thorax, abdomen