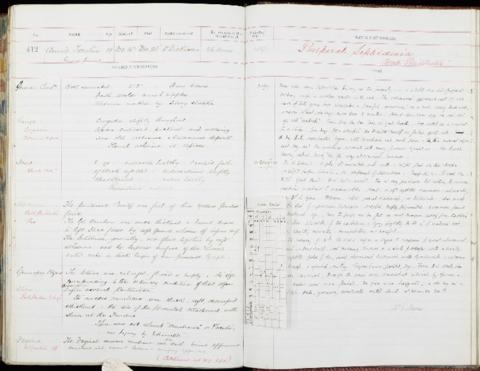 Admitted under the care of: Dickinson, William Howship
Medical examination performed by: Zimmermann, Benjamin Frazier
Post mortem examination performed by: Myers, Arthur Thomas
Medical notes: 'There was some tubercular history in the family: as a child she had frequent barking cough & swollen glands in the neck. The catamenia [menstruation] appeared at 13 and have of late years been irregular & painful, occurring as a rule every three weeks, & never absent, she says, more than 2 months. About Christmas 1879 she was laid up with 'overwork'. Since then she has been in good health, & has acted as a servant to a crêche. Six days before admission she described herself as feeling quite well. A day later menstruation began with diarrhoea and uch pain: she had several rigors next day and the diarrhoea increased with many feverish symptoms. She denied having noticed during her life any abdominal tumour.
Body parts examined in the post mortem: Lungs, heart, abdomen, generative organs, uterus, vagina, ovaries, alimentary canal, liver, spleen, kidneys