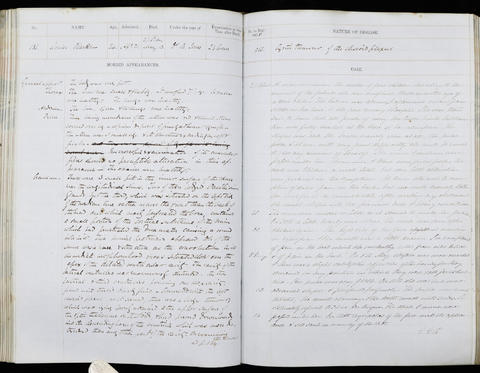 Occupation or role: Married
Age: 34
Gender: Female
Date of admission: 21 Apr 1858
Date of death: 13 May 1858
Disease (transcribed): Cystic tumour of the choroid plexus
Disease (standardised): Tumour (Brain)
Admitted under the care of: Bence Jones, Henry
Medical examination performed by: Holmes, Timothy
Post mortem examination performed by: Rogers, George Goddard
Medical notes: 'A married woman, the mother of four children. According to the account of the friends she was confined three months ago of a dead child. The labour was tedious, & afterwards violent pain settled in the head & she grew drowsy & languid. She was then said to have lost all power of using her lower limbs but sensation was fully marked at the time of her admission’
Body parts examined in the post mortem: Thorax, abdomen, pelvis, cranium