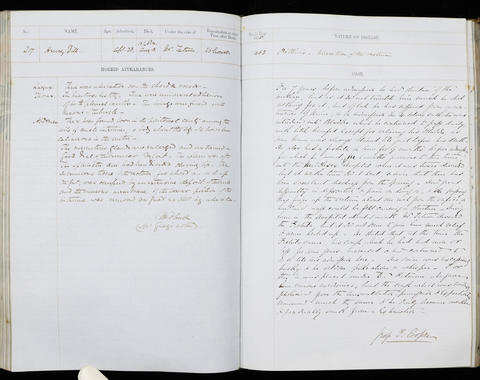 Occupation or role: [Occupation not stated]
Age: [No age stated]
Gender: Male
Date of admission: 28 Apr 1858
Date of death: 18 Aug 1858
Disease (transcribed): Phthisis. Ulceration of the rectum
Disease (standardised): Tuberculosis (Lungs); Ulcer (Rectum)
Admitted under the care of: Tatum, Thomas
Medical examination performed by: Holmes, Timothy and Gray, Henry
Post mortem examination performed by: Cooper, George Frederick
Medical notes: 'For 7 years before admission he had stricture of the urethra, but as it did not trouble him much he did nothing for it, but of late he has suffered from incontinence of urine, so on admission No 4 silver catheter was introduced into bladder, which he continued to pass daily, with little benefit except for relieving his bladder, as some urine was always retained, till just before his death. He also had a fistula in ano for 9 months before admission, for which he went, 2 months previous to this time, into the Middlesex Hospital where it was twice divided but at neither time did it heal’
Body parts examined in the post mortem: Larynx, thorax, abdomen