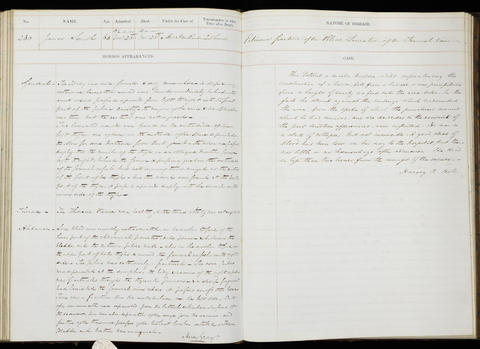 Occupation or role: [Occupation not stated]
Age: 63
Gender: Male
Date of admission: 20 Nov 1849
Date of death: 20 Nov 1849
Disease (transcribed): Extensive fracture of the pelvis. Laceration of the femoral vein
Disease (standardised): Fracture (Pelvis); Laceration (Thigh)
Admitted under the care of: Hawkins, Caesar Henry
Medical examination performed by: Holl, Harvey Buchanan
Post mortem examination performed by: Gray, Henry
Medical notes: 'This patient, a master builder, whilst superintending the construction of a house, fell from a ladder & was precipitated from a height of nearly 40 feet into the area below. In the fall he struck against the railings which surrounded the area, from the spikes of which the punctured wound which he had received, and are described in the account of the post mortem appearances, were inflicted’
Body parts examined in the post mortem: Thorax, abdomen