Educated at Bradford Grammar School, Magdalen College, Oxford where he studied chemistry, and Heidelberg University in Germany. Worked as a demonstrator in chemistry in Oxford

In charge of the Physiological Laboratory of the London University at the Imperial Institute in South Kensington, where he studied chloroform anaesthesia with George Buckmaster and cholesterol.

Born in Croydon, the son of a cotton-mill owner. Apprenticed to a physician in Suffolk aged 16. Studied medicine in Edinburgh for a winter. Travelled to North America in 1823 for two years. On his return to England, he entered a partnership with his brother William Ancell, who owned a pharmacy.

Attended medical lectures at St George's under Caesar Hawkins, and St Thomas's and visited Paris for further studies. License of the Apothecaries' Company 1828, diploma of the Royal College of Surgeons 1831.

Dean and later principal of St George's Medical School, 1988-1997. Instrumental in the creation of the joint faculty of health care sciences with Kingston University

Chairman of the council at St George’s Medical School

Born in Fife. Educated at the Royal High School, Edinburgh. Spent a winter as a medical student at the Westminster Hospital. Qualified in 1838 and spent time in Germany, Italy, Switzerland and France before studying at Caius College, Cambridge 1842; MB 1847.

Lumleian lecturer, censor, Harveian orator and treasurer at the Royal College of Physicians. President of the Royal Medical and Chirurgical Society 1881. Published 'Manual of Medical Diagnosis' 1851, and on heart disease. Chelsea's first medical officer of health, examiner on sanitary science in Cambridge. 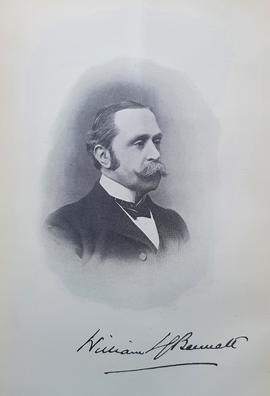 Resident medical officer at Blacklands House, a private asylum for gentlemen in London. Visiting physician to Blacklands House and its successor Newlands House in Tooting and to several other asylums alongside his private practice in Clarges Street, Grosvenor Street and later Wimpole Street.

Married Louisa Holloway in 1864; they had two sons and two daughters. Retired to Tunbridge Wells.

Librarian during the Second World War

History librarian / archivist at St George's in the 1980s

Born in London, son of Dr James William Braine, the first of 11 children.

Resident medical officer at the Children's Hospital, Great Ormond Street. He was offered the post of chloroformist, which he reluctantly accepted, following the resignation of Henry Potter, chloroformist to St George's Hospital after the death of a patient; Braine took over Potter's practice in Maddox Street, and became an early specialist in the administration of anaesthetics. Anaesthetist to the Dental Hospital in London 1868-1894; vice-president of theh hospital on his retirement. Braine was the first in England to adopt the use of nitrous oxide gas for anaesthesia. Anaesthetist to St Peter's Hospital for Stone. One of the founders and the first president of the Society of Anaesthetics, 1893-1895. Honorary secretary and vice-president of the Medical Society of London. Published on anaesthetics.

Lecturer on chemistry at the Royal Institution for St George's students

The son of Richard Bright F.R.C.P, G.C. Educated at Rugby and Balliol College, Oxford, were he graduated with first-class honours in natural science in 1863.

He married in 1869 and soon after left London for the continent. He practiced for a time in Dresden but in 1875 settled permanently in Cannes. One of the subjects of his research was the condition of the air in hospital wards. He died on 21st January 1922 in Cannes, survived by his wife and three daughters.

In 1840 he was articled at the Royal College of Surgeons to John Goldwyer Andrews at the London Hospital. After qualifying he was appointed house surgeon. After a year he attended hospitals in Paris and later Vienna where he studied opthalmic surgery and pathological anatomy. He later travelled to Prague, Berlin, Pavia, Pisa, Florence and Rome. Returning to London, he was elected in 1852 surgeon on the staff of the Royal Orthopaedic Hospital, and in 1862 he was elected assistant surgeon at St George's Hospital, and later surgeon with orthopaedic wards until 1874.

By the time of his death he was surgeon to the Orthopaedic Hospital, and for a time he was lecturer on Orthopaedic Surgery at St George's. He was on the staff of the Royal Hospital for Incurables, and consulting surgeon of the Belgrave Hospital for Children. For many years he had the chief orthopaedic practice in England. He was an associate of the Academy of Sciences of Rome, and corresponding member of the Medical Societies of Lyons, Odessa and Rome, of the Chirurgical Society of Paris, and of the American Orthopaedic Association.

Born in Wiltshire 9 Jun 1783, son of Rev Peter Bellinger Brodie and Sarah Collins. His uncle was Thomas Denman, physician and obstetrician, alumnus of St George's and father-in-law of Matthew Baillie.

Published widely on surgery, including 1818 'Pathological and Surgical Observations on the Diseases of the Joints', which led to reduction in the number of amputation and new treatments for joint diseases. He also published on diseases of the urinary organs and nervous affections. In 1854 he published, initially anonymously, 'Psychological Inquiries'.

Married Anne Sellon in 1816; they had four children, including chemist Benjamin Collins Brodie, 2nd Baronet. He resigned from St George's in 1840 and retired to Surrey. Died of a shoulder tumour in Broome Park, Surrey 21 Oct 1862, aged 79.

House surgeon and surgical registrar at St George's Hospital from 1881, until he moved temporarily to Switzerland due to tuberculosis.

On his return to England, he worked as an assistant to Sir William Dalby and as a surgeon to the Belgrave Hospital for Children. Appointed aural surgeon and lecturer on aural surgery at St George's Hospital in 1892, following Dalby, and consulting aural surgeon in 1912.