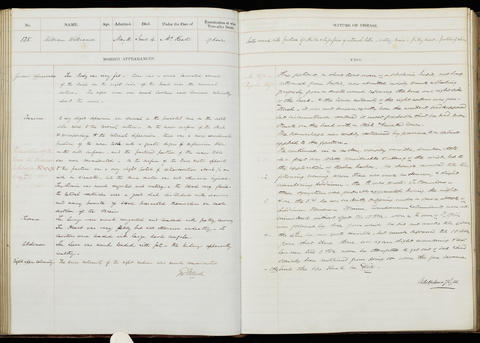 Occupation or role: [No occupation stated]
Age: [No age stated]
Gender: Male
Date of admission: 31 May 1847
Date of death: 04 Jun 1847
Disease (transcribed): Scalp wound with fracture of skull and depression of internal table . Watery brain. Flabby heart. Fracture of radius
Disease (standardised): Wound (Scalp); Fracture (Skull); Watery (Brain); Disease (Heart); Fracture (Arm)
Admitted under the care of: Keate, Robert
Medical examination performed by: Gee, Adolphus John
Post mortem examination performed by: Pollock, George
Medical notes: This patient, not long returned from India, was admitted noisily drunk and bleeding profusely from a small wound exposing the bone on the right side of the head and the lower extremity of the right radius was fractured. It was not known exactly how the accident had happened, but it seemed probable that he had been struck on the head with a stick and knocked down.
Body parts examined in the post mortem: Cranium, thorax, abdomen and right upper extremity
Type of incident: Homicide/murder?

Preparation of the bone see Museum Catalogue Series I.8