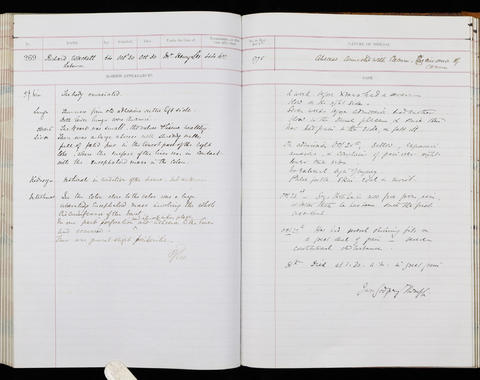 Occupation or role: Labourer
Age: 54
Gender: Male
Date of admission: 20 Oct 1875
Date of death: 30 Oct 1875
Disease (transcribed): Abscess connected with caecum. Carcinoma of caecum
Disease (standardised): Abscess (Intestines); Cancer (Intestines)
Admitted under the care of: Lee, Henry
Medical examination performed by: Thrupp, James Godfrey
Post mortem examination performed by: Lee, Robert James
Medical notes: A week before Christmas he had a severe blow on the right side. Seven weeks before admission he had another blow to the same place and since then had had pain in the side and felt ill.
Body parts examined in the post mortem: Lungs, heart, liver, kidneys and intestines
Type of incident: Trauma/accident