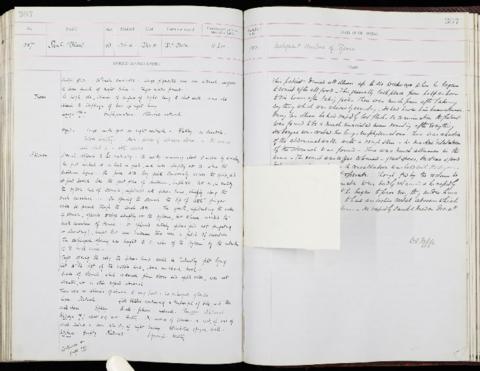 Occupation or role: [Occupation not stated]
Age: 63
Gender: Male
Date of admission: 14 Nov 1894
Date of death: 5 Dec 1894
Disease (transcribed): Malignant stricture of pylorus
Disease (standardised): Constriction (Stomach)
Admitted under the care of: Owen, Herbert Isambard
Medical examination performed by: Ogle, Cyril
Post mortem examination performed by: Fyffe, William Kington
Medical notes: 'This patient denied all illness up to six weeks ago when he began to vomit after all food - This generally took place from half an hour to six hours after taking food - There was much pain after taking anything which was relieved by vomiting - He had never had haematemesis. During his illness he had rapidly lost flesh'
Body parts examined in the post mortem: Thorax, abdomen
Illustrations: Yes
Type of incident: n/a