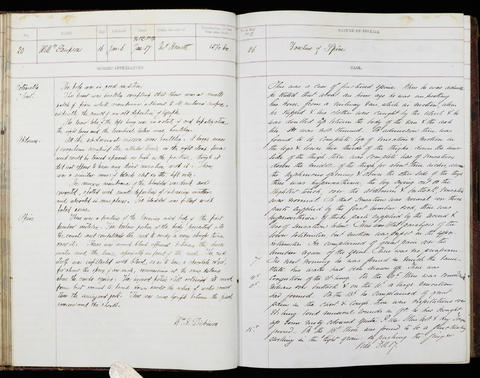 Occupation or role: Horse driver
Age: 16
Gender: Male
Date of admission: 6 Jan 1862
Date of death: 17 Jan 1862
Disease (transcribed): Fracture of spine
Disease (standardised): Fracture (Spine)
Admitted under the care of: Hewett, Prescott Gardner
Medical examination performed by: Pick, Thomas Pickering
Post mortem examination performed by: Dickinson, William Howship
Medical notes: When he was admitted he stated that about an hour ago he was unhooking his horse from a railway van, while in motion, when he slipped and his clothes were caught by the wheel and he was doubled up between the body of the van and the axle.
Body parts examined in the post mortem: Chest, abdomen and spine
Type of incident: Trauma/accident